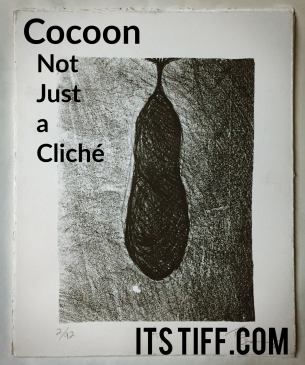 I got into art in my senior year of high school when a friend saw some of the work I was doing at home in my spare time. That lead me to going to a private art school for college where I majored in sculpture and graduated with a Bachelor of Fine Arts degree.

I don’t think I ever had a clear understanding of what my life was going to turn out like. But really, do any of us? While I was working on my degree I explored many facets of art but really found such beauty and creative spirit in every day objects. I was fascinated by Marcel Duchamp’s Dada anti-art and “Readymades.” I was also very intrigued by environmental pieces by artists like Edward and Nancy Kienholz, Duane Hanson, and George Segal. The fact that you could interact with someone or something in real scale blew my mind. The Kienholz’s even added smell to their environments.

I had an immediate draw towards the bright colors of the POP art of Andy Warhol, Robert Indiana, and Roy Lichtenstein. Magdalena Abakanowicz and her textile sculptural work also fascinating me.

I loved the cerebral work of Jenny Holzer, and the performance art of Laurie Anderson. And animation work by the Brothers Quay. I still do!

But those formative years of finding my “hand” or style was like measuring a quantum object. You couldn’t measure it. Or if you could it would immediately change. There were many things that I created that I have only now come to understand.

I was very lucky to attend a college that taught a lot about process and technique. It allowed me to learn various technical processes from stone carving and metal casting to drawing and printing.

A theme that I fell into around my junior year was rebirth and transformation, specifically through the symbolism of the cocoon. I was drawn to the relationship of transformation and its interpretation in different ways and different cultures. I likened the cocoon to the ancient Egyptian sarcophagus. I thought about how the body in ancient Egypt was prepared for travel through to the “other” world, and how the caterpillar will spin its own sarcophagus and dissolve itself into a gelatinous goo to be reborn into the beautiful moth or butterfly, whose colors and iridescence mimic that of the gilt artwork on the Egyptian coffin.

I began making sketch after sketch of cocoons. I also built them human sized with burlap, chicken wire and liquid latex. I was mad about them. My first presentation of these human-sized pods was in the classroom. I had built one that was the size of a small adult and presented it hanging from a 8 foot branch of iron wood which was then suspended in the studio space.

Another presentation had one about 7 foot tall and suspended in a tree among a forest in south central Wisconsin. In this “natural” setting it was almost completely camouflaged until you were right in front of it.

My most ambitious presentation was to build two of them in a stairwell at our school’s new location. In hindsight it wasn’t the best location for them as this was an emergency exit route. But what better place to put them than a little used urban environment. Life, death and change happens all around us, everywhere.

I had also been taking some print classes. These incorporated lithograph stone and plate print techniques. A few weeks ago I found some of these prints. They are almost two complete print editions of two separate images. I found them after going through an old musty portfolio that had been in my basement during a seasonal flood. Luckily none of the prints incurred any water damage. 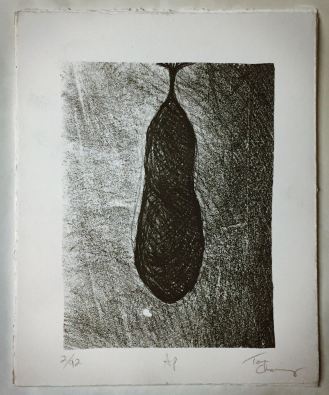 At the time, all of this imagery and its relationship to myself remained hidden, but the meaning of these cocoons is very clear to me now. 30 years ago this was something that I thought was just a neat theme to explore. But now! Now “I” have transformed and transitioned, and am showing my glittering gilt and color.

I rarely look at anything that I’ve created in my early career as an artist and actually like it. But as I reflect back now as Tiffany and look at the signs that Tom was putting up, I can clearly see the subtle and quiet way he was shouting for help as if I were watching a B-movie with the sound off as the starlet desperately screams for help.

But thankfully I have merged from my pupa, and my film has a happily ever after. So I guess it is a cliche!